What’s Up With Amazon Drone Hives? 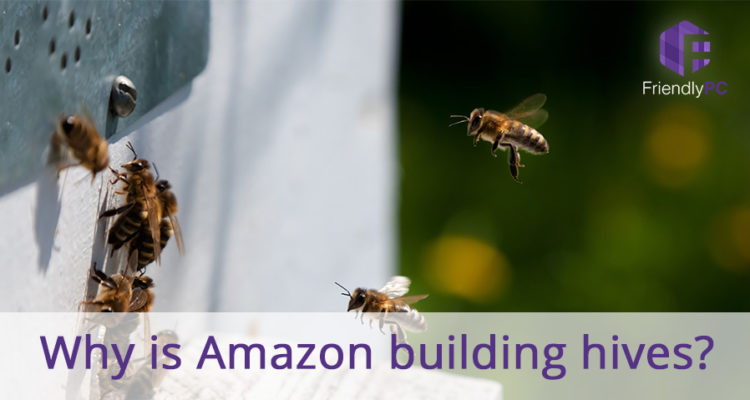 Have you been keeping up with the growing popularity of drones? We sure have. If you’ve noticed a little extra buzz about the subject in the last few weeks, it’s for good reason. Amazon recently published a patent application for huge drone hives. Yes, you read that right (but Amazon actually calls them “Multi-level Fulfillment Centers for Unmanned Aerial Vehicles”). So far as we know, Amazon does not yet have concrete plans to start building these far-out structures, but the idea is a lot of fun to think about. So, if you’d like to learn more about these Amazon drone hives, read on!

Why does Amazon need drone hives?

According to the patent, these facilities will in fact sometimes look like a beehive, but they won’t have anything to do with honey (the making of it, at least). Instead, each of these structures would be used as a home base for a fleet of Amazon’s delivery drones.

“But, FriendlyPC,” you might say, “Amazon uses good old fashioned package delivery services to bring my orders to my door, what’s all this about drone delivery?” It’s true that Amazon hasn’t yet started this program in the real world, but they have tested it. In fact, Amazon is very serious about the future of a service it calls Prime Air. With a promise to make deliver orders under 5 lbs within 30 minutes, you can bet consumer demand will be serious too.

And this is where the so-called drone hives come in. To deliver so quickly, Amazon will need a network of purpose-built facilities that store, load, and recharge its drone army.

Some of these buildings may truly resemble beehives. However, Amazon’s patent application states the structures may also take the shape of a pyramid or cone. For a clearer idea, take a look at some of the images included in the application: Even if none of these drone centers end up looking like a beehive, the name would still be appropriate. As the drones shuttle in and out all day (and night?), picking up and dropping off their deliveries, the only thing missing from a dead-on beehive analogy is a queen bee. And to be honest, we’d rather not think about what a queen drone might look like.

Where will these drone fulfillment centers be located?

Amazon’s drone hives will be built mostly in urban areas, for a couple of reasons. First, the space requirements of Amazon’s warehouses mean they are generally built on the outskirts of urban areas. Second, the traffic that naturally comes with populous areas slows down delivery, costing Amazon (and its customers) more money. Third, a drone’s flight range is limited, and Amazon needs to have enough customers within range to justify building a drone facility.

Is your imagination buzzing, now?

These are the highlights of what we know about Amazon’s drone hive patent, and we can’t wait to see how it works in the real world.

What do you think? Are you excited for super fast delivery, or worried about the breakout of urban war between pigeons and drones? Let us know in the comments!