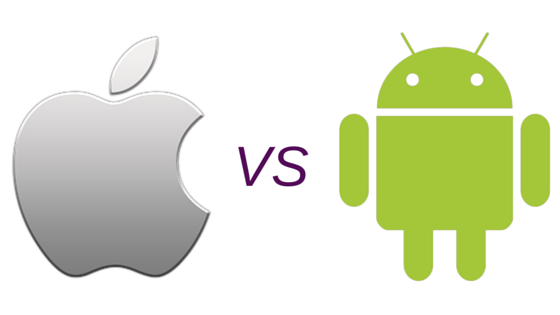 It’s a sensitive subject for some; the Android vs Apple debate. But, no matter if you suffer from ambivalence or preference, there are some striking differences between the two. If you’ve been thinking about switching from one operating system to the other, let your friends at Friendly PC compare apples to, well, …Apple’s?

Before you can make an informed decision on whether or not to switch, if you’re toying with that idea, you should probably know what each OS is and who develops it. Google is the proud owner of the Android OS using open source technology and Apple of iOS using closed source technology. What this means is, Android is much easier to modify and share and is less restricted than that of its counterpart, iOs.

Battery life, battery strife. However, Android and Apple have provided users a way to combat that with features like Doze and Low Power Mode, respectively. While it’s hard to judge which one performs better in terms of battery life, seeing as how there are only a handful of iPhone models out there and, well, a gazillion Android’s, Doze has some pretty cool features. Like, a motion sensor to detect if it’s being used or not and then powers your phone down accordingly. Apple, on the other hand, has toggles that let you adjust settings to conserve battery life.

Apps Available for Each

Both stores, Google Play and Apple’s App Store (iTunes), offer at least one million apps and both boast downloads measured in the billions. Most popular apps are available on both operating systems. With such impressive numbers, what’s the deciding factor here? It really boils down to how big your wallet is. Apple historically reaches a more affluent demographic which are ready and willing to spend more money on app downloads than that of Android users. However, if you like free apps, you might err on the side of Google Play as only 196,000 of their some 1.4 million apps cost money to download. However, be prepared to deal with in-app advertisements.

While there are an array of devices available for Android users at many different price points, sizes and hardware capabilities, there are only limited available for Apple, as iOs is only available on Apple products; iPhone as the phone, iPad as the tablet, and the iPod for music. That said, as we briefly touched on the more affluent demographic of Apple, those devices tend to be more expensive than Google’s.
So whether you’re an Android or an Apple enthusiast, there is sure to be something to fit your fancy. If you fall on the side of iOS, remember, Friendly PC now offers product repair on Apple devices!