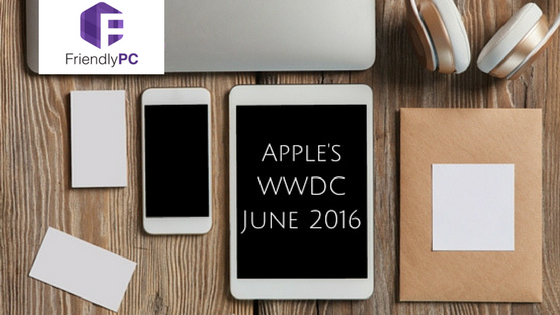 Each June, software developers around the world celebrate their version of Christmas morning: Apple’s Worldwide Developers Conference. During this conference, Apple showcases its new software platforms and new devices in their repertoire. This year’s conference did not disappoint. Apple announced the upcoming release of iOS10. The previous versions of their iOS have gotten less than stellar reviews by many critics. The iOS 10 update, however, is getting people excited. It overhauls 75 different features from the current iOS. First, you will finally be able to uninstall those pre-loaded and permanent apps like “Stocks” from your phone. It will have a cleaner lock screen and a more accessible camera.

Gone are the days of sending a boring text message with one, sad pizza emoji. Thanks to Apple, the messages app will get a complete overhaul. This announcement was one of the more popular reveals and will likely be the most recognizable update in the lineup. Your texts can now include background animations, handwritten notes, or mysterious invisible ink texts. Predictive text will include a feature to find and replace words with emojis. Digital Touch, a feature previously only available on Apple Watch, will now be available through iOS10, allowing you to write messages on your photos before you send them. Writing out the features of the new messaging app doesn’t do it justice–we suggest perusing this article to really get an idea of all of the impressive new ways to send a text via iOS10.

iOS 10 will also include some major upgrades to Siri. One allows you to talk to Siri “normally.” Rather than shouting “Siri, send text!,” you can simply say, “Tell Matt I’ll see him at 5.”  Siri should be able to recognize this command and offer a lot less “sorry, I didn’t get that” responses. Siri will also work within other apps to allow you to search through photos on Pinterest or get a ride from Uber. Siri’s improved deep learning will help make the predictive text feature more accurate and help keep your calendar up-to-date. Basically, Siri will be better.

Speaking of Siri, Apple has now expanded her residency to the Mac for the first time. Siri will now be a part of OS Sierra and can be your computer’s personal assistant. Her capabilities will include any and everything she can do on your handheld device, but she will also be able to scan documents and files that are on your hard drive. In OS Sierra, there will also be a stronger integration of your iCloud, allowing all of your documents stored on your Mac to be accessed via any device connected to your iCloud account.

While these are just a few of the cool advancements announced at WWDC, there were even more that will improve the functionality of your Apple device or computer. We can’t wait for the fall release to start using all of these great new features! If you have questions about upgrading your Mac device or are looking to get the newest releases, stop by Friendly PC!