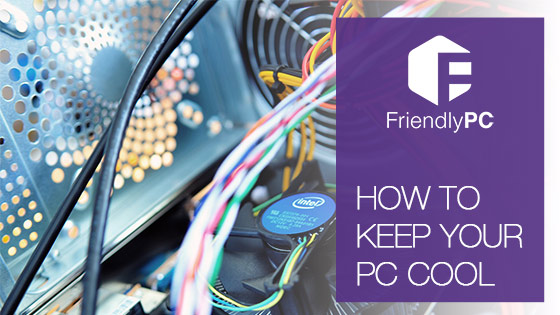 A cooler computer is a happier computer. Computers that are properly cooled not only last longer but also run more efficiently and are more stable. This is especially true for those who overclock their CPUs, pushing the system closer to its limits. But, whether you’re a gamer or just use your computer to browse the Internet, careful temperature control is essential.

Here’s how you can keep the temperature of your hardware under control and ensure a longer, more stable life for your computer:

Let’s start with measurement. After all, how do you know how aggressive you should be about cooling if you don’t know how hot and bothered your computer already is? If you don’t already have an in-case temperature display, you’ll want to install some temperature monitoring software. For just the basics, Core Temp will do the job. For more advanced information, try a program like HWMonitor.

Keeping your components free of dust and debris is essential to computer health. Dust will insulate your components, causing them to retain heat and leading to a hotter overall computer. Things like dust and pet hair can also block airflow in your computer—especially on case fans!—compounding the problem. Thankfully, dust is usually a cheap and easy fix. All you’ll need is a can or two of compressed air, which can be found at most stores with an office supply or electronics department.

We mentioned airflow above because it’s absolutely essential to engineering a cooler computer. A computer case with good airflow expels the warm air created by the components and, ideally, pulls in enough cool air to maintain a balance. To increase airflow, you’ll use a combination of cable management and fan speed control. Cable management requires some thought and a few velcro strips, twist ties, or rubber bands. You can monitor and adjust the speed of your computer’s case and component fans with a program like SpeedFan.

Another inexpensive way to improve cooling is to remove and reapply the thermal paste between your CPU and its heatsink. Thermal paste will deteriorate over time, so if it’s been a while since your CPU was installed, replacing it is probably a good idea.

These are the essential, mostly free steps to a cooler computer, but if you want to push the temperature even lower, you’ll have to make a bigger investment. The component upgrades that can have the biggest effect on case temperature are:

If you have any questions about tackling these steps or could use professional help, don’t hesitate to reach out!