The FriendlyPC Guide to WWDC 2017

Home The FriendlyPC Guide to WWDC 2017 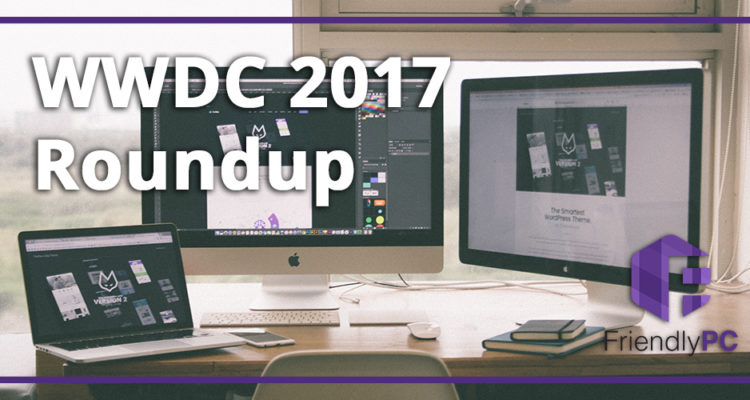 It’s summer, so you know what that means: it’s time to talk about the Apple Worldwide Developers Conference (WWDC)! Each year, Apple welcomes about 5,000 to the Bay Area (and many more online) for a four-day tech showcase. Last year, software (especially iOS 10 and Siri) stole the show. However, this year’s WWDC 2017 event showed that Apple’s hardware division has been very busy, indeed.

First and foremost, Apple’s Macbook line of laptops received welcome upgrades across the board. Apple promises the newest Macbooks will be significantly faster than previous devices. By incorporating Intel’s seventh-generation processor (codename: Kaby Lake), expanded SSD storage (which Apple claims will be 50% faster), and increased RAM capacity, we have every reason to believe Apple’s new Macbooks will deliver on that promise.

Accordingly, the Macbook Pro will get similar hardware upgrades, while the less-is-more Macbook Air will receive only a much-needed upgrade of its processor.

Second, the iMac line of desktop computers will join their portable siblings in adopting Kaby Lake technology and faster SSD storage. Also, iMacs will get a boost to their RAM capacity and improved graphics cards.

Apple also announced the iMac Pro at WWDC 2017, the most powerful computer they’ve ever produced. The Pro model comes with a 27-inch 5K display, up to 18 processor cores, and up to 128 GB of RAM. All of this adds up to 22 teraflops of computing power, which is roughly 4 times that of the standard iMac. However, these impressive machines aren’t for the casual consumer, as the line starts at about $5,000.

Next, Apple announced the iPad Pro range will feature a new CPU and GPU, which will be 30% and 40% faster, respectively. An enlarged 10.5-inch device will also be replace the previous 9.7-inch iPad Pro.

Finally, Apple also introduced an entirely new device at WWDC 2017: the HomePod. This long-expected device will compete with Google Home and Amazon Echo devices as a smart home hub. However, the HomePod’s early advantage lie in its music-playing abilities and sound quality, which has received positive early reviews.

While hardware upgrades may have been more exciting, Apple also announced a number of software updates for its product lines.

Quickly, here are the software highlights announced at WWDC17:

Those were our highlights from Apple’s WWDC 2017; what were yours? Let us know on Facebook and Twitter!