How Much RAM Does Your Computer Need?

Home How Much RAM Does Your Computer Need? 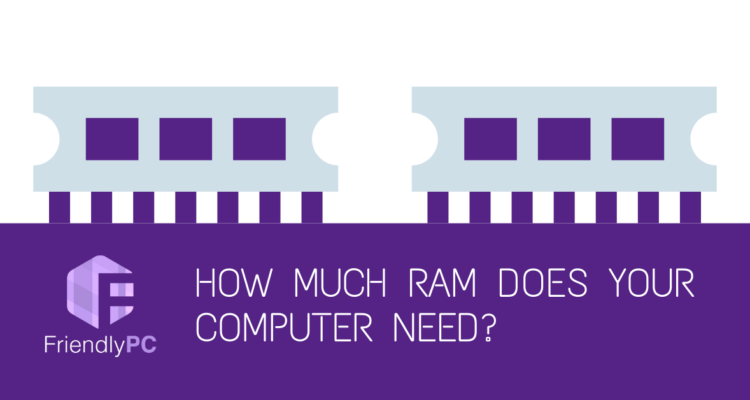 Much like the human brain, a computer’s memory is basically split into two categories: short-term and long-term. Random-access memory (RAM) is your computer’s short-term memory. It’s the component of your computer that holds all of the information that your operating system and applications need while being actively used.

The component that handles your computer’s long term memory, storing our pictures and music and system files, is often referred to as a “hard drive.”

The amount of storage you have in your hard drive can have a significant impact on your computer performance, but it pales in comparison to the RAM’s importance because information stored on RAM can be accessed much faster than in a hard drive.

There are other computer parts and components that affect performance as well, which we’ve covered in other articles. We’ve even given advice on an easy way to pick a CPU.

When you ask your system to juggle more information or run more programs than your RAM can accommodate – usually referred to as a bottleneck – your system and computer will struggle to complete easy tasks quickly.

Today’s technology requires various amounts of RAM to run efficiently. For example a text document may only need a tiny amount of RAM, but a large program like a AAA video game consumes a lot more space.

How much RAM does your computer actually need? That is a common question that we’ve tried to help solve in this article.

RAM Guidelines for Most PCs

Should you choose DDR3 or DDR4?

Double Data Rate or DDR and the number 3 or 4 represent the most recent versions of RAM memory chips.

The main difference between the two is the speed at which they transfer data to and from the CPU. Speed is measured in megahurtz (MHz) with DDR3 being slower than DDR4 by around 500MHz. It’s also of note that the two versions of chips are different sizes, so you’ll need to know the size of your current RAM or future motherboard slot before you consider increasing RAM.

For best performance, computers use 2 memory chips at a time so most packaging will state DDR3 2x8GB to show a total of 16 usable Gigabytes in your device.

If your system could use a RAM upgrade give us a call at 402-965-3300 or set up an appointment to stop in the store– we’d love to help you figure out what’s right for your needs!