Computer Shopping: How to Compare Processors 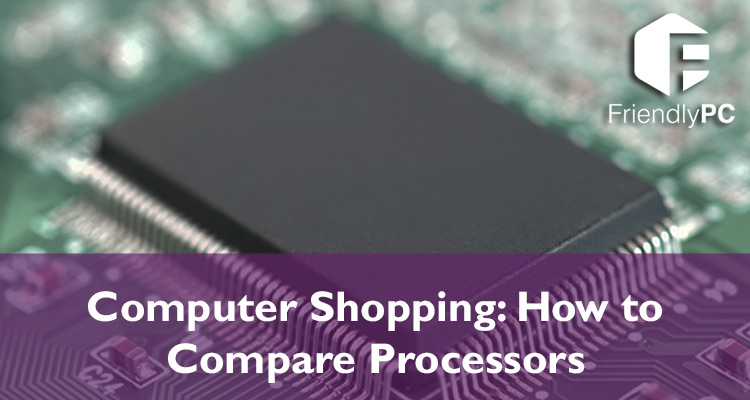 How many of us have gone computer shopping with the mindset of “just give me the processor with higher Gigahertz?” It’s an easy marker, right? A nice, easy number that tells us exactly how fast this computer can run. Not so fast.

In actuality, so many factors come into play in determining a computer’s real-world speed that a processor’s GHz rating can really only be compared to other chips in the same model line. A processor that runs at 3.5 GHz can perform 3.5 billion “clock cycles” a second, but other features such as extra computing cores, 64-bit support, and cache size determine exactly how much work can be accomplished during its clock cycles. A computer processor’s GHz is very similar to a car engine’s RPM, and nobody buys a car based on how fast the engine runs.

We’re not going to take a deep dive into the inner workings of a CPU, today; that’s not why we’re here. What we want to talk about is more practical: how do we comparison-shop computers without spending hours of research on the features of each individual processor? To get the job done, we’re going to have to do a little bit of code-breaking.

The quick-and-dirty way to get an idea how one processor might compare to others is to understand how they are named. Thankfully, Intel and AMD (the two largest manufacturers of CPUs) have made it a little easier on us by maintaining similar naming conventions for their products. By and large, processor product names look like this:

For an example, we can take the AMD A10-7890K, or model 890 in the 7th generation of the A10 product line. The suffix “K” indicates this model is unlocked for overclocking (which means it can run faster than the listed speeds).

Intel product names are built in much the same way, but Intel uses suffixes much more liberally than AMD. Intel products with suffixes H, HK, HQ are tuned for high-performance graphics, and the suffix K is used on models that are unlocked for overclocking. Intel processors labeled with M, U, T, or Y are designed for greater energy efficiency, but are less powerful.

The three main categories (Product Line, Generation, and Model Number) are pretty straightforward: larger numbers within a category indicate higher performance. Changes in technology can make things tricky when comparing models from different product lines and generations, but we want to focus on the broad strokes. Unless you are building a high-performance computer, the subtle developments between generations generally won’t be game-changers for you.

Now, you’ll be a little better informed when you look at a computer’s product description, and and can feel more confident in your choice. Remember, with all of the perfectly capable processors currently in the market, there’s no reason to get hung up on the finer points. For the average computer user, even the lower end models will get the job done for a year or two, so don’t sweat the small stuff!

If you’d like to learn more about computer processors and how they work, check out these great articles: