Microsoft is Back: Windows 11, the First Update in 6 Years

Home Microsoft is Back: Windows 11, the First Update in 6 Years 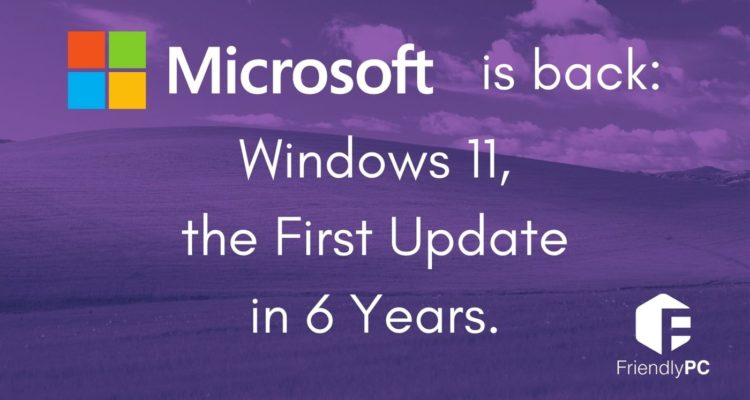 Microsoft announced on Tuesday, August 31st that it will start offering free upgrades to Windows 11 to eligible customers and devices on October 5th of this year. Windows 11 was first announced in June of this year, and became available to a small number of testers. This is what the testers experienced, and what we can expect from this Windows 11 update.

It will have a modern and updated appearance that includes rounded corners and app icons displayed at the center of the task bar. Microsoft made it more customizable by making it easier to arrange multiple app windows on one screen using widgets and snap layouts. Windows 11 will also let you create completely separate desktop screens for the different ways you use your computer. From work, to shopping, to your small business, this will allow you to keep it all separate and organized. The start page, settings menu, and app store will all have updated appearances as well.

The Way it Runs:

Microsoft and Windows had increasing pressure from their competitor, The Chromebook, to be able to run Android apps. This will now be possible with the Windows 11 update thanks to the Amazon Appstore. As well as updates to the apps it will be able to run, Microsoft Teams will also be updated. Windows 11 has gone through rigorous testing since June to fix any bugs or hiccups with the way it runs. They want to assure it will be a smooth rollout for their consumers.

What You Need to Know:

So far, the jury is split 50/50 on whether or not they are excited for the newest Windows update. For those who are a bit apprehensive about it, don’t worry. According to an article released by CNBC, Microsoft will continue to support the popular Windows 10 until 2025. This gives people lots of time to make an informed decision and adjust as needed. Another thing you may need to know as a Microsoft consumer is that the update will be available to chips dating from 2016 onwards. Microsoft has high hopes that all eligible users will be updated by 2022.

Overall, us here at Friendly PC are pretty excited about the update. It is always interesting when technology has a huge new development. Seeing as we haven’t had a Microsoft Windows update since Windows 10 in 2015, we see this update as long overdue. Windows 10 has served us and many of our customers and readers well, but we are here for what is to come!

Are you excited about the Windows 11 update? Will you be sticking to your Windows 10 for as long as possible? Or are you a Mac/Apple user? Let us know your thoughts in the comments below. If you have any questions regarding your device and the Windows 11 update, feel free to contact us and we will see what we can do to help!

1 comment on “Microsoft is Back: Windows 11, the First Update in 6 Years”