Neural Networking, AI and The Fathom 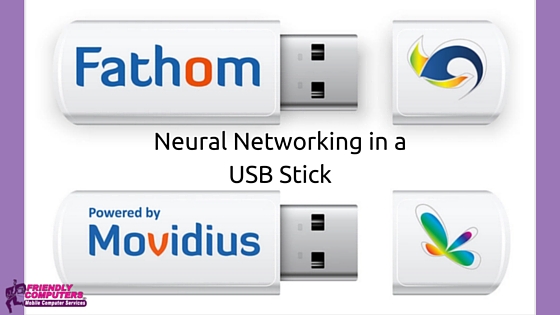 Technology is constantly changing, this we know.  You’ve likely had the rush and excitement of buying a new laptop, only to feel like 6 months later it was already outdated.  It’s difficult to keep up with the changes, until now.

Imagine if your networks and systems were able to learn and update and change with the addition of one simple USB stick, keeping them from becoming obsolete.  The Fathom Neural Compute stick can be plugged into any device with a USB port making it “smarter”.  You will have to have the right operating systems, but, it will make networking much easier.  The Fathom stick has a processor that will essentially create a neural network for your system.  Sounds amazing, right?  But, what exactly is a neural network?

A neural network is essentially technology’s answer to the human brain.  It was inspired by the brain’s ability to receive input through neurons and learn and/or respond adapting to these inputs.  Neural networks perform in a similar fashion; it is a system of connected networks that send messages between each other and adjustments can be made so that the system essentially adapts and learns to perform functions based on the inputs.  The systems learn from real-time data, making their ability to interpret information easier than the rule-based systems of the past.  For example, neural networks and artificial intelligence can create more accurate outputs for facial recognition, speech recognition and handwriting recognition than the logic based programs we’re used to using.

The Fathom Neural compute will be commercially available soon.  This will allow any person, tech savvy or not, to change their “regular” computer into a neural network.  They can be used with drones, cameras, tablets, maybe eventually even smart cars.  A practical example of the Fathom’s use was with a drone.  Imagine you can teach the drone to scan and learn about different terrain and it would know that it could land on large, flat surfaces rather than rugged, unstable ones.  The processing power of the Fathom is so impressive, it even got Google’s attention.  You can expect to see more devices with neural networking or Artificial Intelligence come to market.  Who knows, Siri’s voice recognition might keep getting better and better!

We do have to wait a bit for the Fathom to hit the market; it is not expected to be released until the Winter.  However, it is rumored to be below the $100 price point, making it a very intriguing and attainable add-on to improve the processing power of your gadgets.