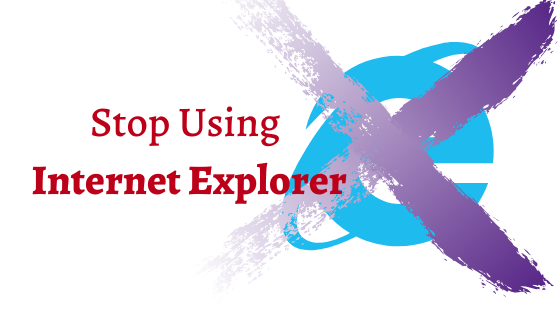 Microsoft has been begging users to stop using Internet Explorer (IE) for some time and we agree. Just stop. While this may seem like common sense to some people, there are still plenty of users that just can’t let go.

As of March 2020, Internet Explorer takes up 4.12% of the internet browser market. Businesses make up the majority of those users. Microsoft has deemed the browser a “compatibility solution”, basically meaning businesses still using the browser are doing so because they’re running outdated programs that only work on that platform or work best on it.

Chris Jackson, Microsoft’s Security Chief, details the “perils” businesses are placing themselves in by still using IE. Companies refusing to switch to the latest browsers are taking on “technical debt” by paying for support on old software.

While some sites still work on Internet Explorer, IE standards aren’t being supported any longer. Microsoft ended support for IE 10 in January 2020. IE 11 will be the final version of the browser.

Not convinced? Here is another reason to stop using Internet Explorer.

Newer browsers are updated as needed, meaning when there’s a threat to security, an update or patch is released ASAP. Users of Google Chrome, Safari, and Firefox probably aren’t even aware updates occurred. Internet Explorer only gets updated on a fixed schedule which means there’s a greater risk to users.

Microsoft discovered a security vulnerability in September 2019 which allowed hackers to completely take over a PC running Internet Explorer. Nothing was safe; data and programs could be viewed, changed, and deleted.

What is the solution to Internet Explorer?

Friendly PC can be part of your solution too. Our Windows 10 update special includes installation of the operating system which runs Microsoft Edge (the successor to IE) and a 250GB solid-state drive for lightning-fast speed, virus and malware checks, and backups of all your data and files. For more information, call us at (402) 965-3300 or send us a message.