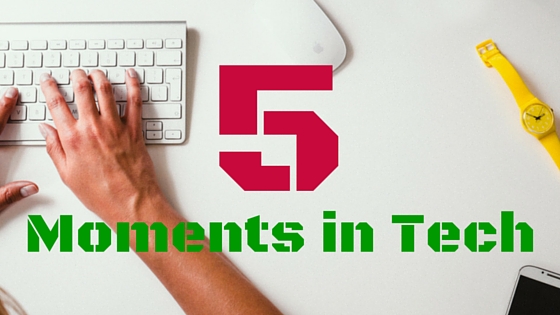 There’s always something going on in the world of technology and we at Friendly PC don’t want you to miss a techno beat. We have so kindly compiled a list of the 5 latest moments in tech that we think you need to be in the know about… because drones, computers and apps, oh my!

You read it right, the first successful drone delivery in the United States has taken place… and it was awesome. On July 17, Flirtey, an Australian drone-delivery startup, delivered medical supplies from an airfield to a medical clinic. The FAA sanctioned flight took place in Wise County, Virginia. The distance from the supplying pharmacy to the medical clinic is about 35 miles and since Flirtey, along with most other commercial drones, is not made to sustain such journeys, NASA actually flew the supplies to an airfield about a mile from the clinic using their own experimental drone, a modified Cirrus SR22. This groundbreaking drone delivery is set to pave the way for future drone-delivery systems. The FAA hopes to have its regulations set in place as early as next year.

IBM Watson Can Tell if Your Email is Too Passive Aggressive

We’ve all been there; re-reading an email just to make sure it didn’t sound a certain way or asking co-workers to take a quick look to check your tone, and even though you thought you did your due diligence- in the click of a button, you’ve offended someone.

Enter: IBM Watson; the cutting edge, cognitive computing technology that could very well save you from yourself. More specifically, it’s Tone-Analyzer tool, which IBM just introduced this week. “The analyzer examines each word — in anything from a brief email to a lengthy document — and applies a color-coded rating based on three dimensions or tones: emotional, social and writing style.” Don’t believe it, check it out for yourself on the demo site.

Have you ever had those days where sometimes the hardest decision you make all day is which Instagram filter to use? Or spent entirely too much time composing the most awesome Facebook status ever, just so everyone else pines over how cool you are? However silly that may sound, it rings true for a lot of folk. Until Casey Neistat, YouTube phenom, invented Beme; the new, video sharing, social app that was designed as an anecdote to what’s being called “the rise of the Curated Self”. The premise is really very simple, Neistat and his team wanted to create an app that would let people share experiences sans that “highly sculpted, calculated, calibrated version of who we are.”

Drones, they’re everywhere. You just read about the first drone delivery in the U.S. and now we’re bringing you the world’s first international drone film fest; The Flying Robot International Film Festival. Set for November 19, FRiFF will be held at the Roxie Theater in San Francisco’s Mission District- and independent theater, which also happens to be the longest continuously operated theater in the country. While this may be the very first international drone film fest, it comes in second in terms of firsts with drone film festivals; NYC hosted their own in March. The basic premise of FRiFF is “to celebrate aerial cinema from the perspective of drones”.

It’s here! What is it? Let us tell you… Microsoft Windows 10, built from the ground up, is intended to be a unified OS where you can use all your apps, gadgets and widgets in one place. Others think it’s a Hail Mary. Personal opinions aside, “this new OS is chock-full of fresh features. To name just a few: a lean, fast Internet Explorer replacement called Edge; Microsoft’s Siri-like voice-controlled virtual assistant, Cortana; and the ability to stream real-time games to your desktop from an Xbox One in another room”. If you want to know more, you can catch a full preview here.

There ya have it, folks! Whether it’s drones, super cool cognitive computing technology or flying robot film festivals you’re into, we like it. If you liked what you read, let us know and leave us a review on our Facebook page where you’ll also find a pretty awesome deal on that Windows 10 update you just read about.