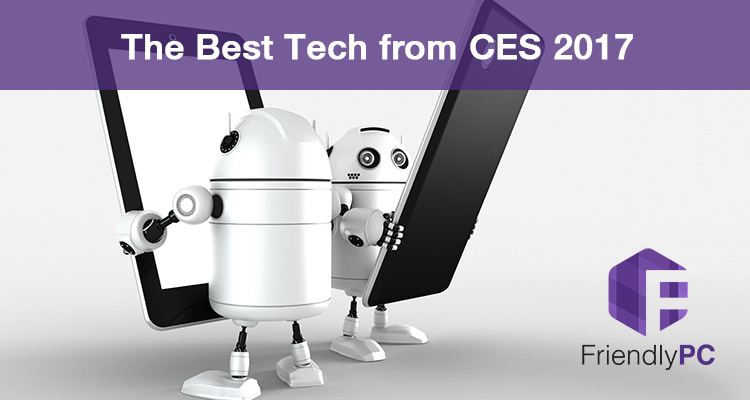 Every January, tech fans the world over look forward to CES (formerly known as the Consumer Electronics Show) in Las Vegas, where the coolest new gadgets are on full display. As you might imagine, we here at Friendly PC are no exception, and wait eagerly to learn about the exciting tech that is coming down the pipeline.

This year’s event wrapped up on Sunday, and it did not disappoint. Featuring everything from hyper-ergonomic work stations, radiation-blocking underwear, and intelligent toasters to self-driving cars, #CES2017 was everything we’ve come to expect from the annual tech-lovers’ paradise. In honor of this year’s gizmo-fest, we wanted to share some of our favorite products from the event.

Now, in no particular order, here are 4 devices from CES 2017 that really caught our eye:

Cramming three 4K displays into one huge gaming laptop is so insane that obviously Razer did it https://t.co/wKUdk7So4D #CES2017 pic.twitter.com/Xdeoi6TWsO

Readers of our blog (or really anyone who knows us at all) will not be surprised that a cool, new gaming computer design makes the list of our favorites, but Razer’s Project Valerie is almost too cool. We never expected to see a laptop with 3 17-inch 4k displays (powered by a Nvidia GeForce GTX 1080 graphics card), but we’re glad it exists. At 12 lbs. and 1.5 in. thick, this certainly isn’t the most portable computer, but this is machine is for those who take gaming seriously – even on the move.

This ultrathin “Wallpaper TV” from LG

Here’s how thin LG’s W7 wallpaper TV actually is against the wall. pic.twitter.com/R3fW3uRRGL

This TV is almost impossibly thin, and can still deliver top-notch images. By combining OLED technology with a clever design, LG created a display so thin and light that it can be hung without the use of wall studs. If this is where TV design is going, we’re all for it.

The friendliest smart hub for your home…ever

Kuri is a friendly robot designed for the home https://t.co/vRds37F4vQ #CES2017 pic.twitter.com/jI4IlgLc4E

Of course, we’re fans of automation, but sometimes the intelligent devices that power our homes lack personality. The Kuri home robot fixes that, and can serve double duty as a pet that never makes a mess!

A much (much) wider perspective on gaming

#ProjectAriana from @Razer might be the stuff gamers dreams are made of. #CES2017 pic.twitter.com/VpZxRDedMm

Razer makes our list again with Project Ariana, which extends your computer’s display onto the room around you for an astonishingly immersive experience. This effect won’t help gamers achieve higher Actions Per Minute (APM) or Frames Per Second (FPS), but would pair great with those epic video games that beg to be experienced.

These are some of our favorite gadgets we saw from CES 2017. Did we miss anything? Get in touch with us on Facebook or Twitter to let us know what you think!