It’s Time to Upgrade to a Solid State Drive!

Home It’s Time to Upgrade to a Solid State Drive! 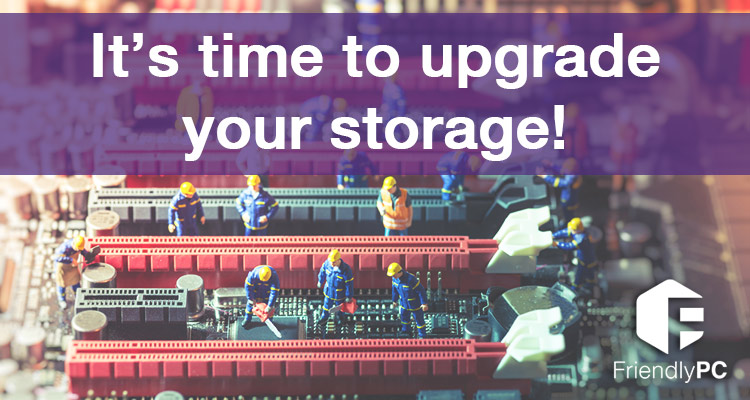 Is your computer’s performance bugging you? Have you made sure it has a more-than-adequate CPU and plenty of RAM, but it still feels sluggish, even jerky? The source of your frustration may actually be your Hard Drive, and the solution is to upgrade to a Solid State Drive!

If this sounds like you, you aren’t alone. Computer processors and RAM are growing more efficient all the time, but Hard Drive performance hasn’t been able to keep up. While the CPU, in some ways, is limited mostly by the speed of electricity, a Hard Disk Drive (HDD) is a mechanical device. Much like a record player, it has a physical arm and magnetic “needle” that runs around the disk to read and write information.  The reader arm can only move so fast while remaining accurate.

The Next Generation of Storage

SSDs get past this limitation by getting rid of the reader arm entirely and using intelligent programming to write, catalog, and retrieve information. SSDs save time with every single operation they perform. Since Hard Drives generally top out around 200 actions per second, that’s a lot of chances to save time.

So, what’s the real-world effect of upgrading to a Solid State Drive from a physical Hard Disk Drive? First and foremost, you get more speed, and lots of it.

SSDs and the Need for Speed

We’ve talked before about how an SSD affects boot time, but that’s not the only process it speeds up. Just like the operating system, every application gets a speed boost after you upgrade to a Solid State Drive. But, the advantage isn’t limited to program load times: every time you save, open, or move a file, it happens with lightning speed.

How much faster? For comparison, you’ll remember that HDDs peak at around 200 (random) actions per second, or 200 IOPS. A high-end consumer SSD can reach speeds over 100,000 IOPS. How’s that for an upgrade?

Of course, the upgrade to a Solid State Drive won’t make everything you do on a computer 500x faster, but we assure you it’s still blazing fast!

And, speed isn’t the only advantage SSDs offer. By removing the mechanics of an HDD, you cut down on a significant amount of heat and noise! In fact, the HDD is one of the noisiest PC components. You’ll be shocked by the lack of clicks and whirs when you first upgrade to a Solid State Drive. Trust us, you’ll get used to it!

And users who like to push their PCs to the limits of performance (we’re looking at you, gamers) will love the lack of heat generation. With an SSD, you’ll be able to push processors and graphics cards even higher, with less risk of damaging your components.

Ready to Upgrade to a Solid State Drive?