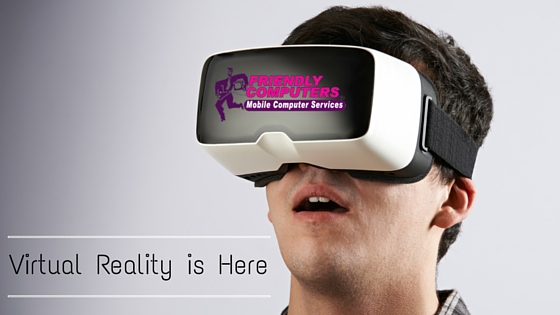 Every tech-lover has been waiting for this day to arrive: commercial virtual reality.  For years, virtual reality was a dream – seeing it in Science Fiction movies or on TV with programs like Star Trek.  As early as 1838, we’ve been working on transforming images into 3-D to experience depth and immerse ourselves into artistic scenes.  Since then, the advances in virtual reality have been incredible; leading us to the release of Oculus Rift, the virtual reality headset released by Oculus VR.

For those not in the know, let’s talk about commercial virtual reality.  What is it?  Virtual Reality is computer technology that replicates an environment, real or imagined, and simulates a user’s physical presence and environment in a way that allows the user to interact with it. Virtual realities artificially create sensory experience, which can include sight, touch, hearing, and smell.  The commercial element of it makes it accessible to everyday consumers – the Oculus Rift is a portable headset that a user wears and views games, VR movies or connects with other friends in the VR world.   The Rift retails for $599 and a Samsung smart phone VR attachment retails for $99.

With the launch of any new technology, the reviews are mixed.  Virtual Reality has been an idealistic concept and has finally come to fruition.  The Oculus Rift is the first of its kind that allows people to navigate a virtual space.  Can you even imagine being able to walk around an asteroid like in the short VR movie “The Rose and I?”  Mind. Blown.  Of course we’re impressed! But, with any good critique, we have to talk about the downsides.  Users complained of the bulky wire that caused them to fumble or trip as they moved around.  They also mentioned it seemed more geared towards gaming rather than a pure VR device.  Right now, there isn’t a way you can interact with characters with your hands – you’ll pass right through them instead of touching them.  They are working on developing hand motion controls to overcome this issue, but, if you wanted your Oculus Rift now, you’d have to be patient with this glitch.  An honest review can be read here.

In the next few months, we’ll see even more commercial VR sets roll out from companies like HTC’s Vine VR and a Sony PlayStation’s version.  With each competitor’s product and consumer feedback, the VR world will continue to grow and improve.  If you’re interested in upgrading your gaming system or computers for these exciting new products, visit us here.