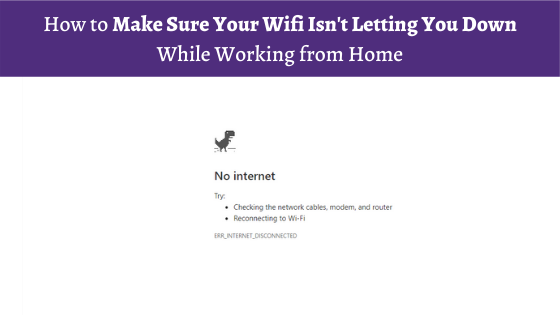 These days people expect life to be a little crazy, a little uncertain, and to expect the unexpected. Many people have gone from working at an office to working from home due to the coronavirus. While the move has added some comfort by letting us work sitting on the couch or  comfy chair, there are many new challenges to face as well. One of the most frustrating is an unreliable Wifi connection.

At the office, there was likely a team of people in charge of keeping your computer running smoothly and your internet connection constant. At home, the reality is different. A recent study by Whistle Out, a cellular plan tracking company, shows nearly a third of surveyed people working from home have dealt with a weak or non-existent Wifi connection.

The good news? You don’t need a top-of-the-line Wifi router or the most expensive internet plan to have a good internet connection. We’re sharing a few easy steps to ensure your internet speeds are as fast as possible so you can stay productive and stress-free.

Get closer to the Wifi router

Ideally, your computer should be connected directly to the router with an ethernet cable. If you can’t plug into the router and your internet connection drops or is spotty, move closer to your Wifi router. Every Wifi router is able to push its signal a specific distance. The farther away you are, the weaker the signal. A few feet closer to the router can make a big difference.

When you can’t work in the same room and the Wifi signal isn’t as strong as needed, there may be too many walls or obstructions blocking the signal. Don’t worry, you still have options.

Sometimes your internet signal just needs a boost to reach your computer. An easy addition to your network is a Wifi range extender. These devices capture the signal from your router and then send it out again, to a further range than the router can do itself.

There are plenty of inexpensive options too – some plug directly into an electrical outlet where the Wifi signal is weak and some look almost exactly like the router and can sit on a table or shelf. We suggest purchasing an extender of the same brand as your router.

Most routers today send out a signal on a 2.4 and 5.0GHz frequency band (or channel). You can use these channels to prioritize your devices and your work traffic. For example, most smart home speakers, locks, lights and hubs use only the 2.4Ghz channel, while streaming devices and computers can use the 5GHz channel.

Setting up your devices so that only work related traffic uses one of those channels will ensure your internet speeds aren’t being split between too many devices, giving you a more stable internet connection.

Some top-of-the-line models take prioritizing traffic a step further by offering Quality of Service, allowing you to designate some traffic types as more important than others. For example, your children may be watching TV or playing an online video game in the next room and using the same channel 5GHz as your computer. QoS can prioritize your work video calls over streaming devices for that short time.

If those three actions fail to solve the problem, it’s likely time to upgrade your Wifi router. Its components may fail over time due to wear and tear; often it’s easier and cheaper to replace the router than try to fix it.

Wifi router technologies are advancing quickly and new models are being released often, which means you can purchase a new model that is significantly more powerful at nearly the same cost as your old one.

Picking the best router for your home requires some consideration. Will you be gaming heavily, or running multiple streaming devices at once? How many people will be using the internet at once?
See our blog post How to Choose the Best Gaming Wifi Router to know exactly what to look for.